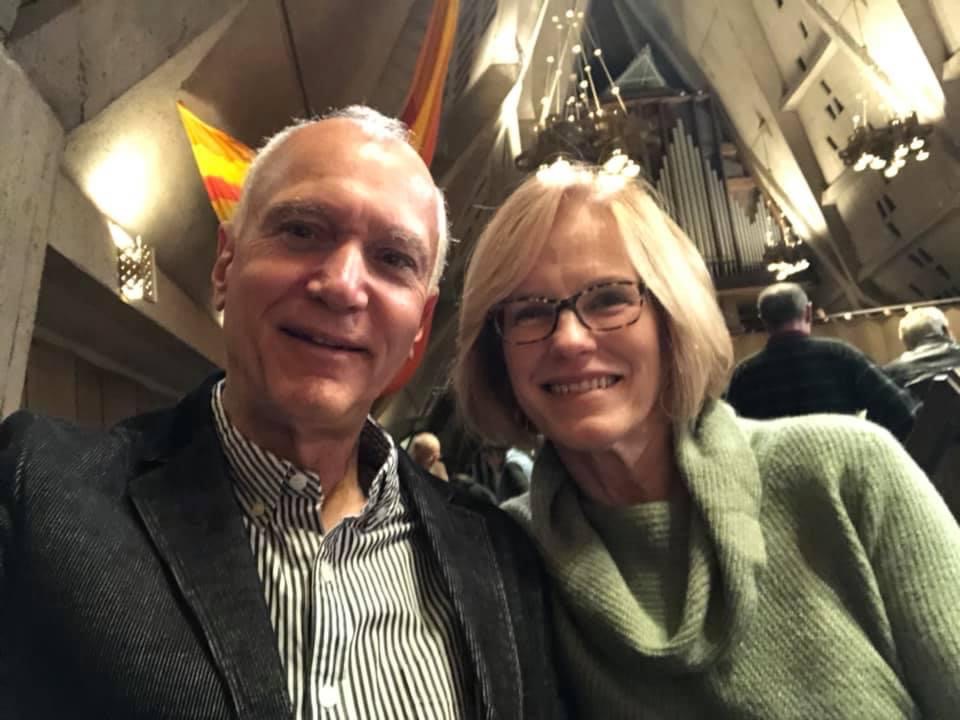 This was our story!

But we learned that with the right skills you can turn a marriage with conflicts into a relationship with a deeper connection!

That’s because conflict is a sign that something new wants to emerge in your relationship. Something that will bring healing, wholeness and deeper connection.

And sometimes that sign shows up as early as the honeymoon!

That’s what happened to Sandy and me!

For years, Sandy and I have been on a journey in our own marriage.

For us this means… 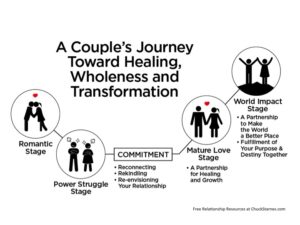 It all began with two people madly in love – Chuck and Sandy.

I’ll save you the sappy details but we were IN LOVE. I took her to Ernie’s in San Francisco for dinner. Then to the Top of the Mark – Mark Hopkins Hotel for drinks.

And while looking out over that beautiful city, I asked her to be my wife. She said “yes”! And I was the luckiest guy on the planet.

Most couples see signs of the Power Struggle anywhere from two months to two years after the wedding vows.

Our power struggle began on the honeymoon. That’s right. As a matter of fact on the day after the wedding.

Sandy had given me a beautiful watch as a wedding gift – a battery powered, electronic watch. One of the first of its kind. I’d never had one before.

Problem is, there was no instruction manual. So I spent the first couple of hours “the morning after” (yes, the first day of our honeymoon) trying to set it up (yeah, I know.).

To me this was normal. Not doing anything wrong here. Except for one detail. I was married now. Not alone. And we were on our honeymoon for cryin’ out loud! Now that I’m married, it’s not really cool to just do what I want, without any consideration for the other person in the room.

But how was I to know?

As Sandy tried to communicate her disappointment to me, I immediately felt attacked.

Feelings of inadequacy overwhelmed me. So I pulled away from her – literally withdrew from the conversation. This really upset her and I had no idea why or what to do.

Even though we “coped” and moved on, this tragic episode began a pattern that would last for years. I’d get lost in my world (work, hobbies, whatever). Sandy would feel abandoned.

She’d express disappointment. I’d pull away further. That would trigger more feelings of abandonment, resulting in more expression of disappointment, which would cause me to…well you get the idea.

Welcome to the Power Struggle!

All she wanted was a close connection with me. That’s what marriage is supposed to be, right?

Like many couples we struggled to cope with this pattern. But it always costs when you merely cope with a problem rather than dealing with it.

The price we paid for years was the insecurity of an unstable connection that could be easily ruptured.

Two precious daughters were born, as we continued to do the best we could.

What we didn’t realize is that both of us had brought our childhood wounds and defenses into our marriage. Unconscious pain from childhood that drove me to abandon ship when criticized, and that drove Sandy to criticize when abandoned.

Over and over…and over again.

But a breakthrough came when we began practicing Imago Couples Dialogue. The therapy I now use with couples every week.

The process slowed us down in a way that helped regulate our emotional reactions. And that gave us a chance to see each other – things about each other we’d never seen before because of all the defenses.

Then we began to embrace our differences, and empathize with each other.

And we began to see how our childhood dramatically affected our relationship.

Sandy grew up in an amazing home. She was SO attractive. And so was her family. Her parents did a great job. But even with great parents, all children experience wounding at some level. It’s inevitable.

When Sandy was 2 ½ years old her mom had twins. Both infants suffered with colic. And both mom and dad were consumed by the need to care for them.

Some of what Sandy needed was lost in the process. Her mom was amazing. And dad too.

But no matter how good you are as parents, wounds happen to our children in ways we’re not aware of.

This feeling of abandonment surfaced many times later growing up.

Experts say that approximately 90% of our upset comes from history. 10% is related to the present.

The Dialogue help me see that the pain that Sandy felt on our honeymoon was not just because of me.

I was not the source of her pain, only the trigger.

Here’s what we learned that helped us move from the Power Struggle to Mature Love.

1. A childhood wound of abandonment can be activated when your partner disconnects from you.

For me to “leave her” for a watch brought back all that pain from childhood.

Am I worth being taken care of? Am I worth pursuing? Am I more important than a watch?

2. Healing comes when you finally get what you needed in childhood from your intimate adult partner.

Sandy wanted me to choose her. To be close to her. To be enamored with her, not a watch (even though she gave it to me.).

Even though that didn’t happen then, it happened later.

During one of the Dialogues she made a change request.

In a moment of safety and empathy she made this request.

“The next time you feel like pulling away from me will you make an appointment with me to dialogue and tell me about the feelings that make you want to withdraw.”

It was a stretch for me. But when I did it, it brought healing.

It was amazing how granting this change request helped me overcome the force of my own adaptations and stay present with her.

And when a change request like this is granted, your lower brain, where all your memories and pain and defenses reside, is not going to say in that moment, “We’ll you’re about 20 years too late!”

No! It’s going to say, “Finally I’m getting the love I always wanted!”

And healing is the result.

3. Growth comes to the one bringing healing.

That would be me.

I can’t tell you the feelings of wholeness I experienced as I stretched and grew in to this kind of behavior Sandy was asking for.

Staying present with her was VERY hard because all I felt was anger and fear and wanting to run!

My strategy from childhood, which helped me stay alive, was not going down easily (I’ll talk more about this next week).

It literally called me to access a part of myself that I had lost and never developed growing up.

And the feeling of wholeness was something wonderful like I’d never felt before.

So what about you?

Is it hard to understand why you fight?

Does your partner’s reaction seem extreme?

Join us on this journey toward healing and wholeness.

Get the skills you need to turn marriage conflicts into a deeper connection and passion together.

If you haven’t already…

Subscribe to my email list by entering your name and email below, and receive my posts with free resources delivered to your inbox every Saturday morning.

4 thoughts on “Our marriage fights began on the honeymoon! Is there any hope for us?” 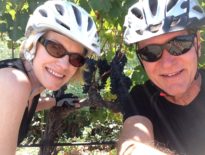 Marriage What do I do when my husband is avoiding conflict?… 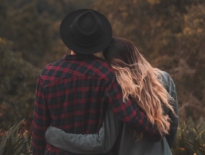 Marriage How can my marriage survive an affair?