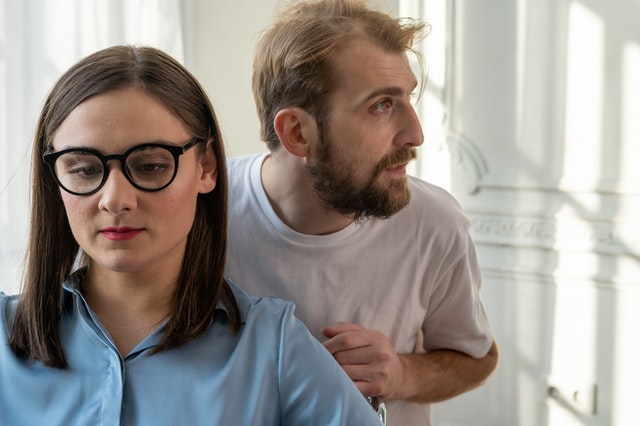 Couples fight for one fundamental reason: they bring their childhood defenses into their relationship.

The way you learned to adapt and survive in childhood can negatively impact your adult relationships…even if you had really good parents.

…and it happens UNCONSCIOUSLY.

And it usually happens in one of two ways.

In your relationship you’ll tend to be a “HAILSTORM” or a “TURTLE”.

Recently I heard a wife say, “When we argue I blow up! And then he does a disappearing act! It always leaves me mad, and then feeling guilty like I’m the one who screwed everything up!”

This wife is in a marriage relationship with a “MINIMIZER”, represented by the TURTLE, who withdraws into his shell when conflict occurs.

She is a “MAXIMIZER”, depicted by the HAILSTORM, insistent and intrusive. Often these two marry each other (though not always).

In the Romantic Stage of the relationship, those wonderful pleasure chemicals that cause us to fall in love with each other also blind us to many sobering realities about each other.

And in this inebriated state, the Hailstorm is drawn to the Turtle and vice versa.

And then after some time together (2 months to 2 years),  the drugs wear off, the Power Struggle Stage begins, and these same two people begin to drive each other crazy!

Growing up, these two may have experienced similar kinds of wounding, frustrations, or unmet needs, but each learned a different way of coping.

Each developed a strategy that helped them survive childhood.

Problem is, that same strategy is now sabotaging their adult relationship.

If you are a “Turtle”, you may driven by an unconscious fear of conflict that causes you to disengage emotionally.

Even though you crave connection with your partner, at the same time you resist that very connection, because deep down you fear the pain of losing that connection.

If you grew up in a home where anger was not allowed, or you had to shut down when people got angry, you probably still tend to check out when there is conflict.

That’s how you survived in the past. And no one should feel judged for that!

Problem is that strategy will not work in your relationship today!

Withdrawing from conflict is like using a gun with a silencer – killing the relationship without detection.

You say, “Hey, I’m just trying to be nice and avoid a conflict.”

But your withdrawal not only frustrates your partner, it triggers her deeper childhood pain.

That is why you are probably seeing an even greater “Hailstorm” effect when you pull away.

If you are a “Hailstorm”, your unconscious fear may drive you to explode outwardly in an attempt to get what you need.

You may have grown up in a household where you had to “get louder” in order to get others’ attention, and you probably learned to face conflict and push and shove, so to speak, until you got what you needed.

This helped you survive then. So no one should judge you.

But it doesn’t work today!

It doesn’t make your Turtle partner feel loved and safe.

Trying to force your partner to be present with you will only cause him to withdraw further into his shell.

So how do we deal with these defenses and reconnect with each other?

Here are FOUR STEPS that will help you get beyond your defenses and reconnect with your partner in a close relationship of mutual healing and growth.

As a Turtle, when you check out emotionally, it triggers her feelings of rejection or abandonment. That withdrawal on your part energizes her as a hailstorm.

As a Hailstorm, when you crowd your partner, it triggers his feelings of being smothered or controlled. That aggression on your part energizes his retreat into the shell.

Mirroring can help you disrupt this pattern.

As a Turtle, you will have to regulate your emotions in order stretch forward and be present with your partner.

As a Hailstorm, you will have to regulate your emotions in order to dial it back and make it safe for your partner to stay present.

Together agree to an “appointment” where you both will take turns, one talking, the other mirroring.

Mirroring is simply repeating back in your own words what you heard your partner say.

Mirroring helps you stay out of your “reactive brain” by turning on your “curious brain”.

Mirroring says to your partner, “You matter, and what you think and feel matters to me.”

Here’s an example of what the whole dialogue process might look like with the Turtle talking and the Hailstorm mirroring.

TURTLE: “When I was asked three times about fixing the front gate, I got really frustrated.”

(Notice how he didn’t use “you” language. As in, “You’re always nagging me.” or “You’re so demanding.” He used non-accusatory “I” statements.)

HAILSTORM: “What I heard you say is that when I asked you three times about fixing the front gate you got really frustrated.”

“It there more about that?”

TURTLE: “Yes. I felt like I was being controlled, and I felt like nothing I do is ever good enough, so I just avoided you and did something else for the rest of the day.

HAILSTORM: “What I hear you saying is you felt controlled and like nothing you ever do is good enough. So you didn’t work on the gate, but avoided me and did something else.

“Is there more about that?”

Staying curious and making it safe for your partner like this allows him to begin to access what’s going on in his unconscious mind.

Seriously, things you have never seen, and things that even he has not been in touch with, begin to surface when dialogue makes the conversation safe.

Suddenly he’s conscious of something…

TURTLE: “Yes there is more. This reminds me of when I was little and my mother would force me to play the piano for her guests. And even though I would do it, I never felt it was good enough.”

Now you’re both in touch with something not seen before.  You’re seeing the SOURCE of your partner’s reaction.

And as the one mirroring, you naturally begin to “re-image” your partner, to see him, not as someone intentionaly trying to hurt you and abandon you…

… but rather, you see him as someone who, is himself, hurting and scared of being shamed and controlled.

You mean a strong, grown up man like him can feel scared of being shamed and controlled by the woman in his life?

Before the dialogue brought them to this place, I’m confident if you had asked him about his fear, he would have reacted and said something like,

“Who me? I’m not afraid of anything.”

So many people say that at first, but when you use the dialogue process to “check under the hood” you’ll find that his whole life is being driven by fear.

Fear he’s not conscious of.

The dialogue helps uncover the root issue behind your reaction and conflict so that you both understand each other at a deeper level.

This process of seeing your partner’s reality transforms the relationship.

Remember you can’t be curious and critical at the same time. Stay curious and your emotions will stay regulated.

It’s haarrrrrd! But you can do it!

Now go to the next step with the Turtle continuing to talk and the Hailstorm now VALIDATING.

2. Validate the feelings behind the frustration.

After summarizing what your partner said, validate him by saying something like this.

“You make sense. And what make sense about what you said is…”

Finish that sentence so that your partner will feel heard and validated.

HAILSTORM: “You make sense. And what makes sense is that when you experience that feeling of being controlled, and when you feel like what you do is not good enough, you pull away from me. That makes sense.

“Especially because when you tell me how your mother demanded from you and you never felt good enough, it’s easy to see how you would feel the same thing when I become anxious and demanding.”

“Does that validate your perspective?”

Wait for an affirmative answer.

Validation says to your partner, “Although I may see it differently, you make sense.”

This will help your partner feel safe…

…while, at the same time establish that the two of you are different.

This differentiation is an essential process if you two are going to connect.

3. Empathize with your partner’s fear, anger, pain or joy.

After validating your partner, EMPATHIZE with him by looking past what he did, and focusing on what he felt.

In our example it would go something like this.

HAILSTORM: “I can imagine how you would be angry when you feel controlled and unappreciated, like nothing you do is good enough. That must really hurt and feel bad.”

HAILSTORM: “Is that what you felt?”

Wait for the affirmation and amplification he gives.

Empathizing says to your partner, “I know what it’s like to experience your pain or fear or joy. I’m present with you in that feeling.”

When you have validated and empathized with your partner, then and only then will you be ready for the final step. It won’t work without the transformation that occurs with empathy.

4. Grant your partner’s deep desire buried underneath the frustration.

Now we ask the Turtle to make a “change request”.

Buried underneath every frustration is a desire not expressed.

By MIRRORING, VALIDATING, and EMPATHIZING, your goal is to make it safe enough for your partner to get in touch with the unconscious desire that lies buried beneath the frustration.

And then to form it into a request.

A request that, when granted, will bring HEALING to him, and GROWTH to you.

Healing, because it represents for him what he’s always longed for but never received.

And growth because, in granting it, it will stretch you, and cause you to grow and discover a part of yourself you lost along the way.

Don’t ask for your partner to do something from now until eternity.

Just ask regarding the “next time” you encounter another potentially frustration experience.

TURTLE: “The next time you ask me to do something, would you first tell me two or three things I’m already doing that you appreciate?”

Embedded in this kind of change request is a powerful formula for healing (for the Turtle) and growth (for the Hailstorm).

And it sets the whole trajectory of their relationship toward wholeness.

Why don’t you sit down right now with your partner and try this out?

Then reverse roles and have the TURTLE mirror, validate, empathize and grant the HAILSTORM’S request.