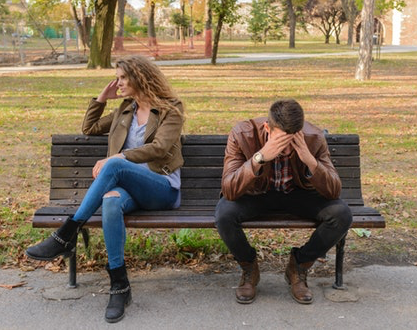 Relationship science tells us that frustrations in your marriage that are recurring and that trigger an intense emotional reaction, come from your past, not your partner.

“Wait a minute! It’s not my past, it’s my partner who is frustrating me!”

Ok, I realize you get frustrated by what your partner does or doesn’t do. But if your reaction is intense and it happens three times or more, science says your partner is only the trigger of  a deeper frustration from childhood.

And, let me guess…your partner sees your reaction as an “overreaction” that not justified.

Behind every recurring, emotionally charged frustration is a deep desire to get something you didn’t get in childhood.

Here’s how you can turn frustrations into requests and keep them from wrecking your marriage.

1. Engage in the Imago Couples Dialogue

The first step is to make your conversation safe.

Laurel was upset because she felt like her husband Ben left her alone at a party. When she brought it up, Ben reacted to her. As you read on, you’ll see how escalated it got!

The Imago Couples Dialogue  helped Ben regulate his reaction so he could listen to Laurel. It also made Laurel feel safe enough to access information buried deep in her subconscious mind.

When a conversation is safe you can identify how your frustration is connected to childhood.

Laurel discovered that her “overreaction” was because her childhood wound of abandonment was triggered when she felt Ben was leaving her.

She had grown up as an only child. Her dad left when she was eight and her mom worked long hours. After school she was at daycare until she was old enough to be left alone at home.

3. Turn your frustration into a request

Buried deep within every frustration with your partner is a wish. A wish to finish what was left undone in childhood. If that frustration can be restructured into a request, your partner can give you the healing you’re unconsciously looking for.

Laurel’s frustration: “I feel like you left me at the party and when I passed by you, you didn’t speak to me. You didn’t even look at me!”

Ben’s escalated reaction to Laurel’s frustration: “What do you mean?! It was a networking party for crying out loud! I was there for business! I wanted you to come along, but I can’t even do my job without you complaining like a baby! When are you going to grow up?!

If they continue to talk like this, Laurel’s wound will continue to be reinjured and the frustration will never be resolved.

Here’s how the Couples Dialogue helped Laurel restructure her frustration into a request.

Laurel: “Last night when we were at the party and you were talking to potential clients, I felt really alone, just like when I was little and came home from school every day to an empty house. What I’m really afraid of is that you don’t realize what being alone does to me and that I’ll always have this feeling of being abandoned.”

Ben (Mirroring): “What I hear you saying is that when I was talking to potential clients you felt really alone. It reminded you of the feelings of abandonment you had when your mom was at work and you were alone in the afternoons. And that brings up a deeper fear that you’ll always feel abandoned. Did I get it? Is there more about that?…

Ben (Validating): “You make sense. Anyone would feel that way given your circumstances.”

Ben (Empathizing): “I can imagine it must feel really bad when you have those deep feelings of being abandoned or forgotten.”

Laurel (turning her frustration into a Request): “One thing that would help me the next time we’re at a party is if you will look for me every 30 minutes, touch my hand, look me in the eye and ask how I’m doing.”

Ben (responding): “I will be more than happy to do that.”

If Ben follows through, he will experience growth, and  it WILL bring healing to Laurel!

That’s how you turn a frustration into a request and keep it from wrecking your marriage!

It’s true! You can resolve every single frustration you have in your marriage…if you understand this one important reality:

Learning to identify and communicate this desire in a safe and loving way will help you not only resolve your frustration, but transform your marriage!

When you resolve frustrations in your marriage by unlocking and fulfilling hidden desires, you become more whole as a person, more fully present, not only in your marriage, but in every arena of your life – family, work, community, world.

That’s my heart’s desire for you!

So how do I turn a marriage frustration into a spoken request so that it can be resolved?

1. Seek first to understand, then to be understood.

About 90% of our frustration in a relationship comes from history.

When a husband says, “You never want to have sex”, his frustration may be connected with an experience in childhood where he received messages that he was inadequate or messages of rejection.

So when he hears, “Not tonight. I’ve got a headache”, he goes ballistic.

How could he be angry when his wife has a headache? That doesn’t make sense.

But what does make perfect sense is that this perceived rejection is triggering those old feelings of inadequacy.

When a wife says, “You don’t listen to me!”, it can be connected with experiences in her childhood where she had feelings that “what you have to say doesn’t matter”.

Though she’s not conscious of it, she has a lot of pain around the question “Do I matter?”

So when her husband does something as simple as looking at his phone when she’s talking to him, it triggers something much more powerful than he realizes.

That 10% stimulus produces a 90% reaction, and the next round of the power struggle begins. And the husband is left wondering what he did that was so bad.

Can you relate to that?

Do you see why it’s so important to first seek to understand before being understood?

2. Listen for your partner’s hidden desire for connection.

The hidden desire behind your partner’s frustration is always to connect with you.

That frustration, that criticism, that off-handed remark, that demand, that glare, is all because your partner doesn’t feel connected with you.

It may be hard to believe, but it’s true.

Your partner’s frustration is because they feel disconnected and don’t like it.

And so, like an infant screaming to be fed and have it’s diaper changed, your partner is unconsciously making life as miserable as possible for you until you figure out what they need.

And what your partner needs is to be emotionally connected with you and cared for by you.

Janet said to her husband, Rick, “You never listen to me. You’re always checking your phone. I feel like I’m talking to a wall!”

Rick didn’t understand why she was so frustrated. He was under the gun at work, and during this season he had to stay close to his phone. He thought he had made that clear to her.

But Janet was frustrated. And she felt justified in her frustration. This was her story and she was sticking to it!

But Rick changed the game they always played. That game of blaming and defending every time they encountered a frustration.

Instead of this becoming a slug-fest, he used his safe conversation skills to dialogue with Janet about this frustration. He had learned that behind every frustration is an deeper, unexpressed desire for connection.

He said, “I can tell you’re upset. Can you tell me what you’re feeling?”

And as they talked, Janet was eventually able to uncover what was behind her frustration.

And as she went on, Rick could see Janet’s reality, the inner logic that made sense to her, and it was all now beginning to make sense to him.

He realized that behind her frustration was simply a desire to be connected with him in a way that made her feel loved and valued.

As Rick continued to make the conversation safe for Janet, the hidden desire behind her frustration bubbled to the surface in the form of a wish expressed.

“Every day I just want some time with you where I feel loved and completely accepted.”

As they both stood there, feeling deeply vulnerable, Rick did one last thing that sealed the deal for Janet and made her feel really connected with him.

3. Ask your partner what you can do to fulfill this hidden desire.

As Rick mirrored Janet’s words he was able to empathize with her feelings and desire.

Then he asked, “What is one thing I can do that will help you feel that love and acceptance?”

Janet thought for a moment and then said, “The next time we go for a walk would you leave your phone at home so we can talk?”

That request was based on Janet’s hidden desire that was at the root of her frustration.

Rick committed to this, and even better yet, on their walk the next day, Janet noticed he didn’t have his phone with him.

This made her feel so loved and safe with him. Not only was their frustration resolved but they felt more deeply connected.

So this is how you can resolve every frustration in your marriage.

– Seek first to understand, then to be understood.

– Listen for that hidden desire for connection.

– Ask what you can do to fulfill this desire.

By following Rick’s example I’m convinced we can resolve every single frustration we encounter in our marriage!